skip to main | skip to sidebar

Well, I've finally finished my Hardware themed quilt. I get so obsessed with these little quilts, I know I have more than 40 hours into this one... 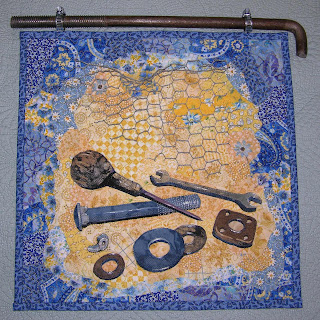 Finished Hardware Quilt
I thought of several ways I might depict this theme, the closest contender was to use a piece of metal hardware cloth (small wire squares) for the background, and then make people (and a dog and cat) with arms, legs, heads and bodies made from actual screws, bolts, wire, and my favorite - steel wool for hair... Okay, it was a cute idea, and I nearly did it!!! But, it was such an obvious "Carolyn" thing to do, so I didn't!!!

Somewhere, rattling around in the back of my mind, I kept thinking about how it might look if I used fabric to make the hardware. I could visualize it, but wasn't sure what technique I'd use to accomplish it. I figured using fusible pieces of fabric would work, but what kind of artsy background could I come up with. With all of this stuff still clunking and rattling around in my brain, as luck would have it, I received an Amazon package that contained two books that I'd ordered by artist Susan Carlson who does fabric collage using nearly confetti-sized (an admitted exaggeration here) pieces of fabric to construct her art quilts. Her first book, "Free-Style Quilts, A No-Rules Approach," and her second, "Serendipity Quilts," explain in words and in excellent photographs how she uses her technique. It sounds easy, it looks easy, but I found out that it ain't easy!!! However, after literally hours upon hours of playing with all manner of yellow scraps, I finally started getting a little more comfortable with the technique. Oh foolish one that I am, I stepped back and took a good look at the earnest beginnings of my new-found expression in art, and realized that it really wasn't all that easy to blend the fabrics so they looked cohesive, but were still interesting... Fortunately, because her technique uses just tiny spots of Aleene's Tacky Glue to hold the pieces in place, it's pretty easy to rip them off when you need to - unfortunately, I had to do a lot of that!!! 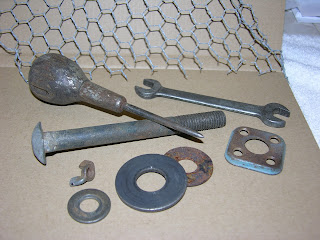 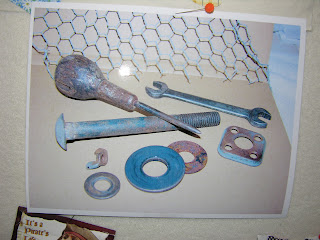 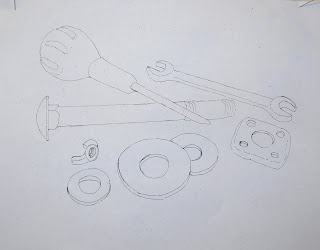 I laid muslin over top of the photo and traced the design. 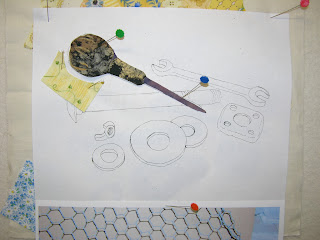 I made multiple copies of the pattern so I could cut out the individual pieces and use them as a pattern to cut them out of fabric.﻿ I used fusible web on the backs of all of the tools and hardware, and then cut them out and either pinned them in place or used the tip of a hot iron to tack them down in a couple of places. 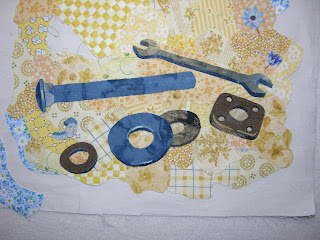 I added a variety of yellow background pieces around the tools and hardware using small amounts of tacky glue to hold them in place. The edges of all fabric pieces, including the tools and hardware, are left un-glued so subsequent pieces of fabric can be slipped around and underneath the edges as needed. Some shading and highlighting fabrics have been added to make the objects appear more three-dimensional. I'm beginning to add the blue border. 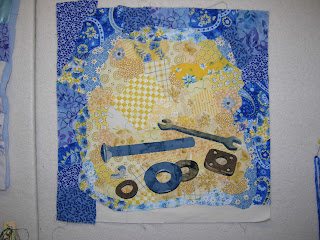 Blue border is almost finished. This was the most difficult part for me to get right as I didn't want to go from the softer yellow straight into the intense blues. So I used lighter shades first, then the darker blues, with the intense indigo blues all the way to the outer edges. After being semi satisfied with the merge from yellow to blue, I found myself really enjoying working with all of the blues, especially the deep indigo blues. 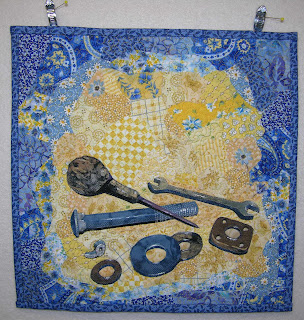 The finished quilt, before adding the poultry netting (twisted metal chicken wire) to the top area. Small touches of white paint have been added for highlights on tools and hardware. Note that black netting fabric was used to add more shading to the lower areas of the tools and hardware pieces. 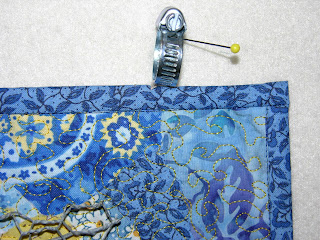 Hose clamps were used as loops to hang the quilt.

A large bolt was slid through the hose-clamp loops.
Although there was a real learning-curve with Susan Carlson's time-consuming fabric collage technique, I have to admit that I enjoyed every minute of it, and will definitely be using it again!

Posted by CarolynPhi at 1:46 PM

Welcome to my blog!

SEAL OF THE CHEROKEE NATION