skip to main | skip to sidebar

My Symbol Themed Quilt - The Cherokee Syllabary
Not long after reading that "Symbol" would be the theme for one of our challenge quilts, I knew what I wanted to do. My husband, Ralph's, family is Cherokee, and because their heritage is so much a part of who they are, I wanted to honor them by making this special quilt. 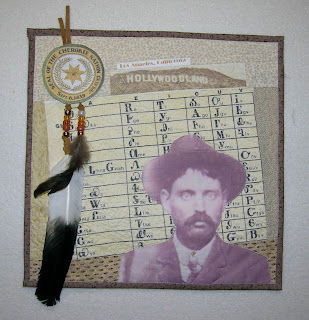 Ralph's Grandfather, Enos Quinn Martin, with the Cherokee Syllabary in the background

A LITTLE HISTORY... There's GOLD in them thar hills!!!

In February of 1860, my husband Ralph's great grandfather, Jack Martin, according to the history books and family stories, is credited with starting the gold rush in the San Bernardino mountains of southern California.

In 1850, when Jack Martin and Bill Holcomb were just teenagers, they left Iowa to find their fortune in the gold fields of Oregon. After finding very little gold, and nearly starving to death, the boys left Oregon and worked their way down through northern and central California, trying their luck at various gold mining camps, until they eventually made their way to Los Angeles. While living in Los Angeles, Jack Martin met and married his wife, who was a full-blood Cherokee, and they made their home in Los Angeles.

Even after finding only scant amounts of gold in Oregon and northern California, Jack Martin and Bill Holcomb hadn't given up their dream of finding gold, and in 1859, when they heard tales of a place called Bear Valley, located in the San Bernardino Mountains of southern California, they began putting aside money and supplies, and planning their trip to Bear Valley.

In February of 1860, two prospectors, Bill Holcomb and Jack Martin arrived in Bear Valley during the dead of winter. They found the valley covered in snow and set up camp in an area called Starvation Flats, located where the intersection of Stanfield and Big Bear Boulevard is today. 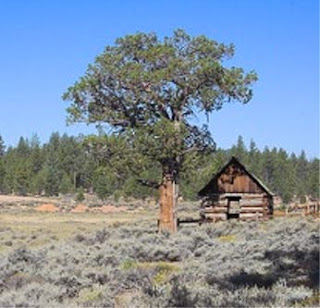 After arriving at Starvation Flats, and with an unusually severe winter coming on, Jack Martin and Billy Holcomb had only enough time to build a tiny cabin that was less than six feet tall at the peak of the roof, and only four feet high at the walls. The cabin was later named "The Pygmy Cabin." 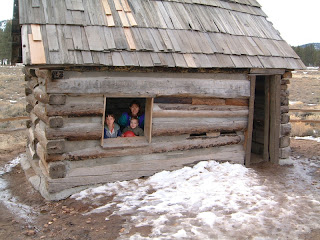 The Pygmy Cabin was a popular spot for tourists in Holcomb Valley, in the mountains of San Bernardino, CA. Ralph and I were able to visit the Pygmy Cabin many times from the late 1950's until the early 1980's when, sadly, it was vandalized and eventually burned to the ground.
Because of the unusually cold winter, food was in short supply for the miners at Starvation Flats, so Jack Martin volunteered to return to Los Angeles for more supplies and Bill Holcomb went hunting for food. Bill headed north across the valley and climbed up the mountain just west of Bertha Peak. From the top of the ridge he gazed upon a new lush green valley that would eventually bear his name. Bill killed two bear, packed his kill on burros and returned to Starvation Flats.

On May 5, 1860, Billy and Jack set up camp in the main gulch located between the upper and lower parts of Holcomb Valley. According to San Bernardino historian L. Burr Belden, the Bear Valley [gold] rush was triggered when prospectors Billy Holcomb and Jack Martin uncovered a gold-bearing vein on a hillside above Bear Valley, from which they averaged $5 to $10 a day apiece. Provisions ran low so Martin packed out after flour [and other supplies] and paid for his provisions with gold dust in San Bernardino.

News of Holcomb's and Martin's find spread quickly, and by July of 1860, there were more than 1,000 miners feverishly working their gold claims. Almost overnight, a town called Belleville sprang into existence with a collection of stores, saloons, dance halls, and blacksmith shops. About the same time, two other towns, Clapboard Town and Uniontown, also appeared in Holcomb Valley. Holcomb Valley even had a brewery!

Sequoyah and the Cherokee Syllabary 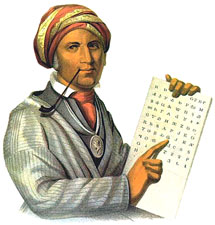 Sequoyah (AKA, George Gist), 1770? - 1843, the Cherokee Indian credited with the invention of the syllabary for writing Cherokee.
In approximately 1809, Sequoyah gathered with some friends in his blacksmith shop, and the conversation led to a discussion regarding the non-Indians' method of communicating through writing. He pondered devising a way for the Cherokee to be able to do the same thing, although those around him were skeptical and thought it was some sort of witchcraft. But, Sequoyah seemed to understand that the writing stood for words.

His plans were interrupted when he volunteered to serve in the War of 1812. After he was discharged from service, he continued to study the idea of a way to write the Cherokee language. The first attempts were to make a symbol for each word in the language, but very quickly the number of symbols was becoming astronomical. This caused him to be more selective in the form of writing the language, and he began listening more intently to the individual sounds that made up the words. After long study, he realized there were 85 individual symbols which were used to make up the many words of the Cherokee language. He was then able to limit the symbols to a much smaller number than he had originally developed, and they could be used in combinations to form any word. His first student was his brother-in-law, Michael Waters, and the first to read and write with the invention was his daughter Ayoka.

Although the system was foolproof and easy to learn, Sequoyah and Ayoka were charged with witchcraft, and were brought before George Lowery, their town chief, for trial. Lowery brought in a group of warriors to judge what was termed a "sorcery trial." For evidence of the literacy claims, the warriors separated Sequoyah and his daughter to have them send messages between each other until they were finally convinced that the symbols on paper really represented talking. At the end of the trial, the warrriors asked Sequoyah to teach them. Within a week, all were able to read and write their own language. Within a few months, a large number of the Cherokee Nation had achieved literacy. This gift helped the Cherokee preserve their history, culture, and spiritual practices.

The Cherokee University in Talequah, Oklahoma has courses in which students are taught to speak and write Cherokee using the syllabary invented by Sequoyah.

"Your invention of the alphabet is worth more to your people than two bags full of gold in the hands of every Cherokee." - Sam Houston

I got a kick out of the following ad, dated May 15, 1828, which is written in both English and Cherokee, in The Cherokee Advocate newspaper. 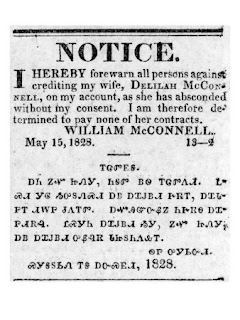 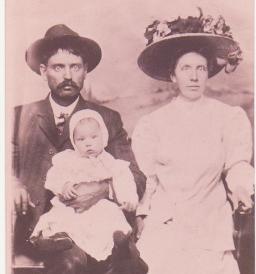 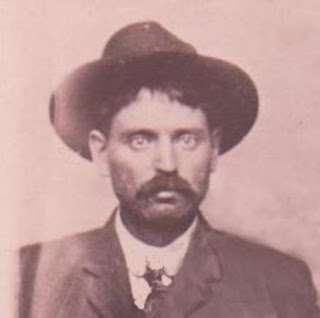 I did a bit of cropping, and "Photo Shopping" to remove little Beulah Jane from the family photo and to re-create his shoulder on the right. I enlarged the photo to fit the 12"x12" quilt size, and printed it onto cotton ink-jet printer fabric. I ironed fusible web to the back of the fabric so it could then be fused to the quilt.

The Cherokee Syllabary was printed on silk ink-jet printer fabric. I laid the silk print into place onto a 13" square of muslin, stitched around the perimeter, and then used a "stitch and flip" crazy-quilting method for adding the remainder of the fabric patches to the quilt.

The Cherokee Seal was printed onto silk. A piece of cotton fabric was placed face down onto the silk fabric, and stitched all around just slightly outside the green band. The seam was trimmed closely, and the medallion was turned right-side out through a slit in the cotton backing fabric. After pressing, the medallion was stitched to the quilt, catching the leather thong that holds the beaded eagle feather.

Posted by CarolynPhi at 5:13 PM

Welcome to my blog!

SEAL OF THE CHEROKEE NATION